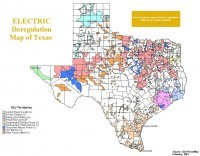 In 2006, I left the wholesale side of the electricity market and joined an energy consulting firm that focused on negotiating electric and natural gas rates for commercial and industrial customers in deregulated markets.  I remember during the summer of 2006, my aunt, a longtime Houstonian, was complaining about her power bill.  She knew that she kept her house colder than the average person, so that Austin, her Great Pyrenees would be comfortable, but she just felt she was paying too much for power.  So I asked her, why don’t you shop around and switch to a more competitive rate with a different supplier?

It amazed me that after 4 years of deregulation, residential customers were still unclear about their options.  Seven years later, I’m proud that each of my family members is taking advantage of deregulation in Texas, but I often wonder how many residential customers are still paying the POLR rate.  Even though each one is now a “pro” at contracting for their electricity, I still receive a phone call or email around contract expiration time asking for my recommendation and I’m happy to give them my view of the market.

The strategy around electric contracting can be very different when you are talking about a business versus someone’s home.  When you are contracting your home and it’s coming out of your pocket, are you looking for long term budget certainty or do you try to time the market and lock short term contracts?

Energy at Home, Energy in Our Community, Supply & Risk Management