Girls on the Run – Putting my best running shoe forward 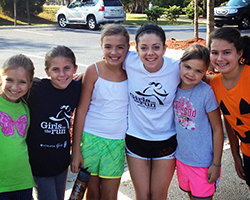 Four months ago I graduated from college, moved 1000 miles away from home, and started working at Burton as an energy analyst… and I did all of this within one week. While this was probably the most exciting week of my life, it was also one of the most daunting. Starting my first job was already a big step, but doing it in a new place where I knew very few people made it even harder. But even in my early days at Burton I learned that one of the most important aspects of our company’s culture is to be involved in the community. In fact, one of the first emails I received as an employee was about the most recent fundraiser the Burton Team had organized. Since I didn’t know very many people in the area, I had an exceptional amount of free time and my coworkers’ enthusiasm for philanthropy inspired me to find a helpful way to fill the voids in my schedule.

I did some research into non-profits in the Atlanta area and decided to volunteer my
time as a coach at the local Girls On The Run (GOTR) chapter. Girls On The Run is essentially a cross country team for girls in third, fourth and fifth grade that focuses on inspiring a healthy body image through running. At the end of the twelve week program, every GOTR team in the Atlanta area participates in a 5k together.

I coach twice a week for an hour and a half. I thought ninety minutes was going to be a short period of time until I was surrounded by fifteen girls that could outlast the energizer bunny. But surprisingly, by the end of practice I’m never tired but instead I’m motivated to do something life-changing or spectacular. Little kids have such an amazing thirst to change the world that it’s impossible not to be affected by their enthusiasm. When I told them I’m an energy analyst, all of them wanted to tell me about how they always recycle and try to save water. Their can-do attitude is infectious and has inspired me to try to find ways to get my Burton coworkers involved with kids in the community…

… more on that later.