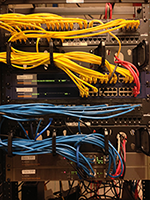 In Part 1, we covered the individual and common workspaces, but in Part 2 we consider the hidden power hog, the “IT Closet/Server Room.”

Instead of having each server as a separate box, we chose to virtualize all of our servers. If you are not familiar with server virtualization it is the concept of partitioning a computer into multiple ones that each run a fraction of the overall physical capability of the real computer.  Since modern servers typically spent 90%+ of their time idle, you can intelligently combine servers together to make fewer servers work harder than lots of servers sitting idle.

Besides the reduced hardware cost and maintenance contracts, the power consumed by an idle server isn’t much different than the fully loaded server (worst case 30% from idle to fully loaded, but results vary depending on CPUs, etc.). So the possibility to reduce power and thus heat is huge and it also reduces management efforts by the IT staff.  Instead of ten server class machines running at idle 24×7, we have two running at moderate loads.

The typical network switch consumes around 15W of continuous power. By picking newer “green” switches that turn off ports if there is nothing plugged into them, our observed real power consumption is around 8W. While a sizeable power reduction (nearly 50%), the switches are not a huge electrical load overall. But the point is this impact is cumulative. If you continue to make choices on device selection and feature enablement with respect to power consumption, the impact is significant across all the devices in your office or enterprise.

As is typically done in well-managed office complexes, the building HVAC is cut off after 6pm. This is a problem here in Atlanta (a.k.a. “Hotlanta”) where the afternoon summer temperatures hover in the upper 90s. Since the sun doesn’t go down until nearly 9pm, we have a few hours where most server rooms, even modest is size, require a cooling unit.

Since the heat dissipated from the servers and network gear is a fraction of the typical power dissipated by an infrastructure like ours, we found that we no longer require a separate A/C unit for the server room. It was instead replaced with a thermostatically controlled vent fan that draws the air out of the room into the plenum when the temperature gets high in the afternoons after the building A/C is cut and isn’t even required when the HVAC is in operation.  This is a huge energy win!

We reduced our overall IT energy footprint significantly (by more than half) with NO noticeable impact to the end users of the systems by simply including energy as a factor in a project that otherwise had nothing to do with energy. The result was an optimal technology solution that also is responsible and embraces sustainability without adding costs beyond what was already going to be spent.

The overall take-away is that if you approach every project or change with energy as a factor, you will find savings. If you don’t approach energy in every project, next year you will have the same or higher utilities that you had this year, and last year, and…

Jason is the Vice-President of Operations for Burton Energy Group. Optimizing energy is a passion since it is in tune with the problem solving mentality that forced him to pursue electrical engineering. When not pushing the envelope of services possible for clients at the office, he is a gadget geek and loves to let the inner engineer out, often to the frustration of his wife. He tries in vain to be the man his dogs think he is.