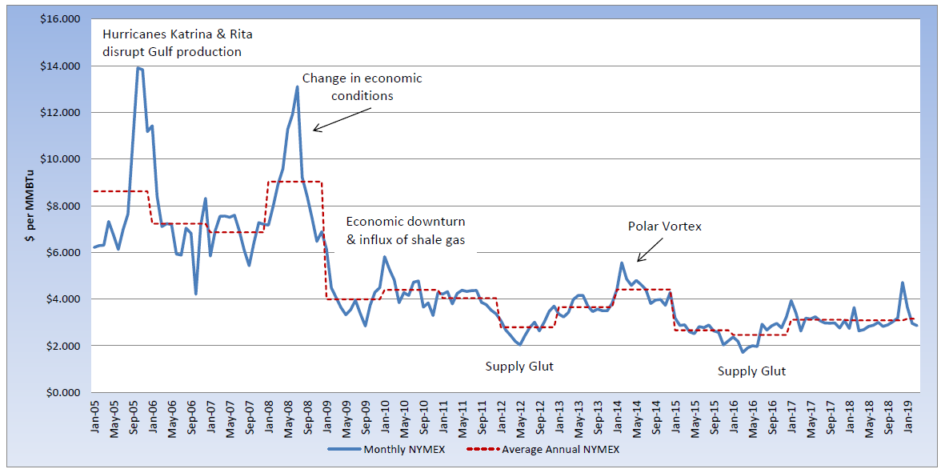 Natural gas has spent this past week trading in a very tight range, not pushing past key resistance levels, or dropping below key support levels. The March contract settled at $2.855 per MMBtu, about a dime below the February settle, for the winter strip to end up averaging $3.469 per MMBtu. In comparison, the previous winter strip (Nov17 – Mar18) averaged $2.967 and the upcoming winter strip (Nov19 – Mar20) is currently averaging $3.039 per MMBtu. The April contract moved into the prompt position at $2.80 per MMBtu and after some movement from increased demand, settled last week at $2.865 per MMBtu. The U.S. Energy Information Administration (EIA) reported a withdrawal of 149 Bcf for the week ending March 1st, which exceeded analyst expectations of 140 Bcf. Natural gas storage is currently 14.9% below last year’s level and 25% below the five-year average, for the same reporting week. A warmer forecast has pushed gas prices down to start the week, but is currently sitting at a key support level. Technical analysts believe that if the market can push below $2.80 per MMBtu, the bears will have momentum for further downside. Traders appear to be more focused on the strong production levels, which are up 7% this year, and less concerned about the below-average storage levels for this time of the year.