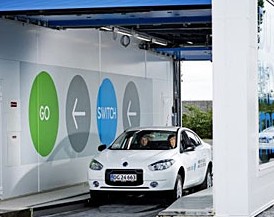 Swapping stations or rapid battery replacing systems has been the new idea to upgrade the electric car experience. When electric cars first made an appearance on the world market, they were seen as a great innovation, but highly impractical because high prices and their dependency on needing to be charged. These factors led companies away from developing electric cars, and in the direction of fuel-efficient gas cars and hybrids. Shai Agassi, the founder and CEO of Better Place, saw these products as a Band-Aid on a bullet wound for oil dependence and that hybrids were not a long-term solution.

So while most companies moved from the more expensive dream of electric cars, Agassi continued to develop the idea and kept trying to reduce the factors that made the car impractical. Agassi quickly realized that the cars’ battery was the reason for its high price tag. He also realized that buying a whole battery at the time of purchase is similar to buying a lifetime supply of gas; it doesn’t make sense for a consumer to take on that whole cost at once.  Agassi’s idea was to allow people to buy electric cars without the batteries. Instead a company, like Better Place, would own the batteries and the electric car owners would rent usage from them. This transaction would be similar to how someone buys minutes for their cell phone, but instead they would be buying miles for their car.
Agassi took this idea one step further and reduced the time a consumer needs to wait to charge their battery. Agassi created swapping stations, which would enable customers to pull in, swap their battery for a fully charged one, and be out even faster than someone refilling their vehicle with gas.  A mix of swapping stations and charge stations would be set up across the country along a smart grid to allow for easy and frequent access.  Charge stations could also be set up at personal residences to allow for overnight charging.

Agassi used his home state, Israel, to help advance and establish his ideas. The first swapping station rolled out in 2008 and then spread across Israel as well as Yokohama, Tokyo, San Francisco, the Netherlands and Hawaii. Unfortunately in May 2013, Better Place filed for bankruptcy. The high investment costs, yet relatively low market penetration caused liquidity problems for the company. This, however, has not meant the ideas of swapping stations and electric cars are dead. In Hawaii, this idea has done relatively well and Better Place was able to sell their swapping stations to OpConnect, who will continue to develop the project. Then last week, Tesla Motors introduced their own swapping station concept. Tesla announced that it will open its own stations later this year in Los Angeles-San Francisco. Their next phase of development will bring them to the east coast to develop in Boston-Washington D.C. corridor. Hopefully Tesla’s size and current market penetration will allow for the stability needed to really let this technology take off.