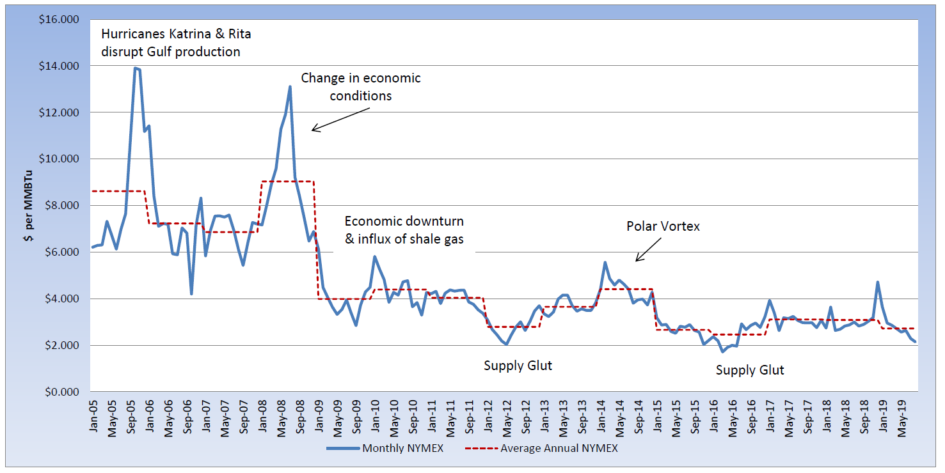 Natural gas demand is at record highs, but prices continue to fall. Earlier this week, natural gas prices dropped to three-year lows while supply growth continues to outpace increasing consumption. The August contract settled at $2.141 per MMBtu, 6.5% below the July settle. The June – August strip has averaged $2.355 per MMBtu this year, which is the lowest summer average since 1998. Including September, the June – September strip is also on pace to average at its lowest levels in more than 20 years. Natural gas production continues at record high levels and is expected to keep growing. Demand for natural gas has been fueled by an increase from power generators that shut in coal plants in favor of running natural gas-fired generation, in addition to expanding LNG terminals and exports. These production levels have also off-set the bullish impact that low storage levels typically bring to the market. As of Friday, August 2nd, natural gas storage levels stood at 2,689 Bcf, which is 4% below the five-year average, but 14.6% above last year’s levels, for this same reporting week. The September contract settled the week at $2.119 per MMBtu and the winter strip is averaging $2.420 per MMBtu, which is about 30% below where the previous winter strip averaged. Currently, analysts expect to see exports continue to expand, but that supply will continue to outpace demand in the near future.