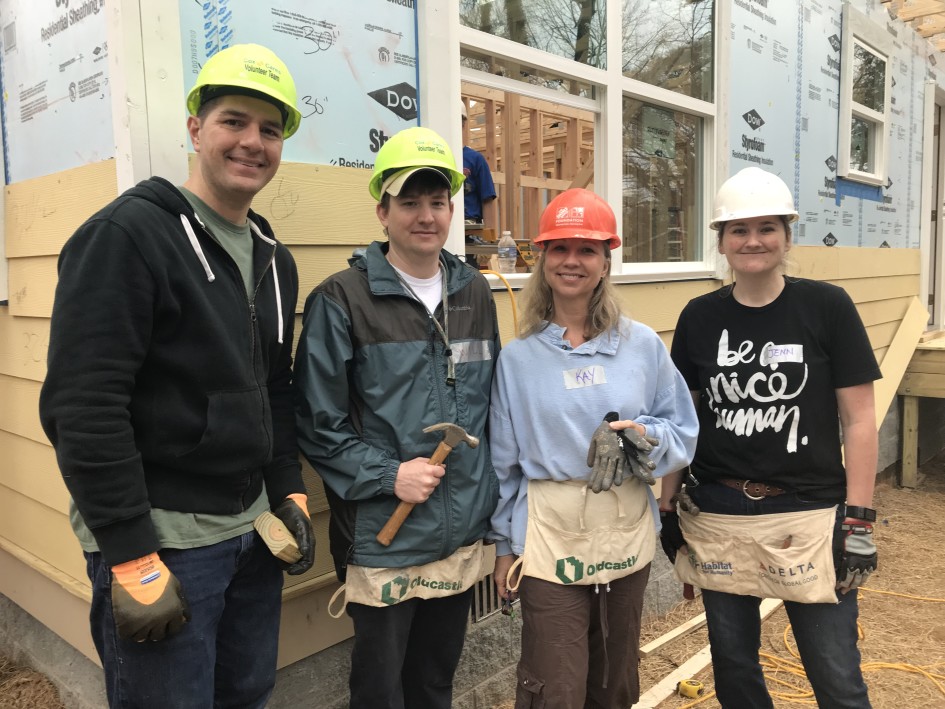 Rather than celebrate my non-existent Irish Heritage, I decided to join some of my awesome co-workers for my first Habitat for Humanity build. Since we were a small group, we joined another larger group build already in progress – Day 2 to be precise.

It was an overcast day, and early…I drove up to a lot where the frame of a house stood. I was eager to help, but not real sure what I could do. The Day 2 tasks were to plumb walls and install deadwood, install exterior doors and security doors, prep and install roof trusses, install windows and trim, install exterior trim and siding, build side porch and stairs.

I thought all lumber was dead, so I knew from the start that I had some “learnin’” to do. We were able to volunteer for any task but being on the roof – so I chose door installation. After some trial and error (and coaching), the team I was on completed our task, and the doors opened and closed just like they were supposed to! My co-workers were busy on other parts of the house and the progress was impressive.

During the day it went from overcast to pouring rain to sunshine – but the team just worked through. Several times I paused to appreciate what can be accomplished when a group of people have the right attitude and know exactly what the task is. I was also surprised at how much I felt a part of that house — not anything I had anticipated.

It was a great day, working alongside people I had just met – all of us touching one house for one woman and her son – all of us knowing without saying, that it really isn’t a chore when you are helping someone who needs a little help.

Kay is Manager of Energy Supply and Risk Management for Burton Energy. Kay stumbled onto the energy trail in the last century as natural gas was becoming deregulated, and has found it to be a fascinating career path. Having worked at some point for almost every side of the business, Kay has developed a well-rounded perspective and enjoys finding ways to reduce energy spend risk for our clients. She appreciates the same things her children do…baseball, good food, and the great outdoors.