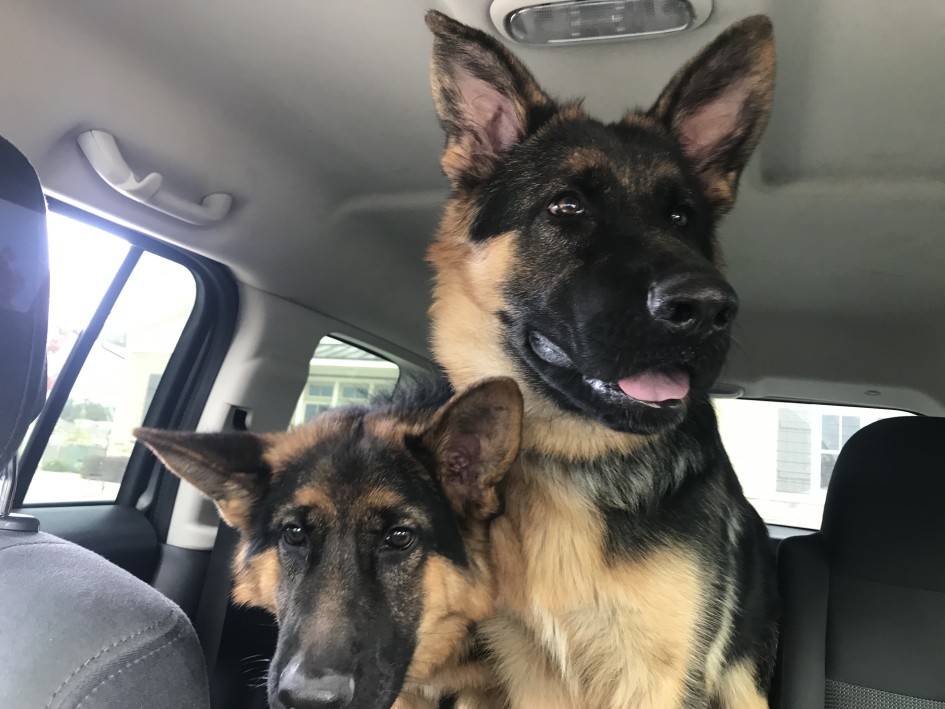 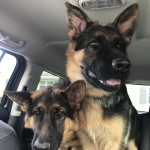 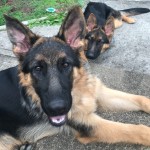 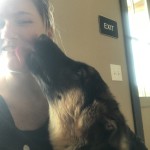 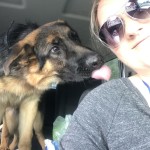 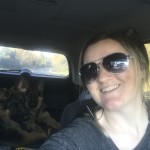 Atypically this Sunday, I ran to the office briefly. Upon leaving to avoid construction traffic, I took an unfavorable route home. Several years ago, a dog ran out in front of me, unable to avoid him, he died in my arms on the side of the road. There aren’t many times, if any, I pass that spot I haven’t cried.  Since I was already on this path, I decided to review the scene of an accident my daughter was in recently. She was rear-ended/sideswiped exactly where I had hit that dog all those years ago. At the time of the accident, I stood roadside thinking this was bad karma for where I had struck that little boy’s dog.

At the top of the hill, there was a Jeep stopped in the oncoming lane of traffic with its driver door open. Cars were honking and zipping around coming head-on into my lane. Suddenly, a dog darted by. I pulled over and I hit my flashers. I got out of my car and knelt in the grass calling the two beautiful German Shepherd puppies. Gleefully they bounded over from the roadway where one had been paralyzed with fear. I began speaking with the kind, obvious fellow dog-loving stranger who had stopped his Jeep. He explained they weren’t his dogs and that they had just been standing in the middle of the road and cars were narrowly dodging him and the dogs.

Since neither had tags, I loaded them up and headed to the nearest vet to check for microchips, which neither had. The vet provided food and water while I made social media posts. My daughter sent out mass texts in her school group-me’s, hopeful the owner would see one. Sitting for a bit, both pups climbing all over me with kisses, the vet called other local vets to see if they could be identified. In the background, I heard a receptionist say, “Calling to confirm Max’s appointment.” The male dog stopped licking me and perked his ears. I said, “Is your name Max?” He kissed me, “You do look like a Max”, he continued happily licking me. After no immediate success, I took them to check neighborhoods for the owner, with no success.

Arriving home, my daughter was ready and waiting to help corral them into the backyard. We made a game plan if the owner didn’t call because it would be too cold to have them outside at night. We also have a dog, currently partially paralyzed, who wouldn’t enjoy house guests. Then as I was on the phone discussing my interesting afternoon, I received a call from our local 911 dispatch. A dispatcher on break happened to see my posts. Later, the same dispatcher fielded a call from a man in desperation because he couldn’t find his dogs. I provided her with questions to verify both dog’s identities which he was able to do. The dispatcher patched us together, moments later I was headed to reunite them.

As I pulled in, I saw the man’s face go from worry to absolute joy, he thanked me immensely. I asked the man what their names were. He replied, “The boy is Max, and the girl is Karma.” How about that, his name was Max and hers of all names was Karma! I noticed the car beside me had the same parking pass as my daughter. Turns out our kids are longtime friends. As I turned and drove away my eyes welled with happy tears. While that spot in the road will always bring me some sorrow, it will now also be a reminder of joy. It never ceases to amaze me, the precision in which things align for everything to work out perfectly. I believe it’s best to spend your energy putting good out into the universe, even on the most random atypical days in the indiscriminate moments. You just never know how your story will turn out or when you might just be the happy ending to someone else’s sadness. Take joy in life’s redirects, you can’t imagine the purpose they may carry.

Jenn Cole is an Energy Analyst on our Operations team, working in tandem with our Supply Team and Demand projects, she joined Burton Energy Group in 2015. After many years working in Educational Technology, she has parlayed her eclectic skill sets as well as experience and found her niche in the energy industry. While Jenn is a die-hard Alabama fan, she most enjoys cheering on her daughter, nieces, and nephews at their respective sporting events with her dog whenever possible. Jenn is an avid outdoor adventurer and thrill seeker: sky-diving, zip-lining, hiking, running, obstacle racing, aerial obstacle courses, paddleboarding, kayaking, canoeing, spelunking, and her newest passion of mountain biking.

Company Culture, Energy at Home, Energy in Our Community